Feeling blue about the end of summer?

No need, September’s Birthstone is sapphire! 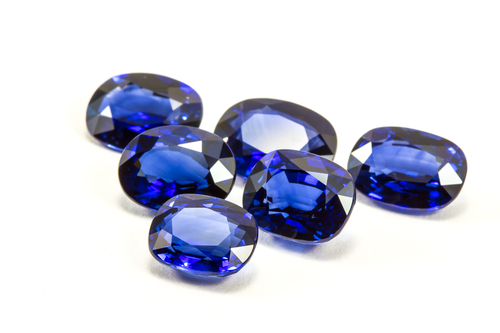 So, it is true to say that summer in Edinburgh this year was less than tropical, but as the season officially changes to autumn today I thought it might be fun to have a brief look at the birthstone for September - sapphire.

Sapphire is one of my favourite gemstones and many people are surprised by the variety of colours it can be found in, though obviously most think of them in shades of blue. As a part of the corundum family of gemstones, sapphire occurs naturally in shades of greens, oranges, yellows, pinks and it can also be colourless. When it occurs in red, corundum is referred to as ruby.

Sapphires have been found in a variety of locations around the world, the most desirable of which is Kashmir. Other locations include Myanmar (Burma), Sri Lanka, Cambodia and Australia. In the US, historic mines in Montana mean that some rare early 20th century pieces by American jewellers such as Tiffany & Co can be set with US mined sapphires. Indeed, sapphires have even been found on the Isle of Lewis, Scotland. In 2016 a new, and significant, source was discovered in Madagascar which has led to something of a sapphire 'rush' in that area.

The GIA have published an interesting guide to assessing the quality of sapphire - https://www.gia.edu/sapphire-quality-factor.

The desirability of sapphire has meant that, for hundreds of years, imitations have been used in jewellery. The 20th century saw the development of synthetic sapphires - stones that are identical in physical properties but grown in a laboratory rather than forming naturally. Sapphires can also be subjected to a variety of treatments in order to enhance their appearance. For these reasons, if you are considering buying a sapphire or a piece of jewellery set with a sapphire, ensure you use a trusted source and someone gemmologically qualified to help you and advise you exactly what it is that you are buying.

Contact Clare to discuss how the September blues should be enjoyed.

Gemstones
Back to blog