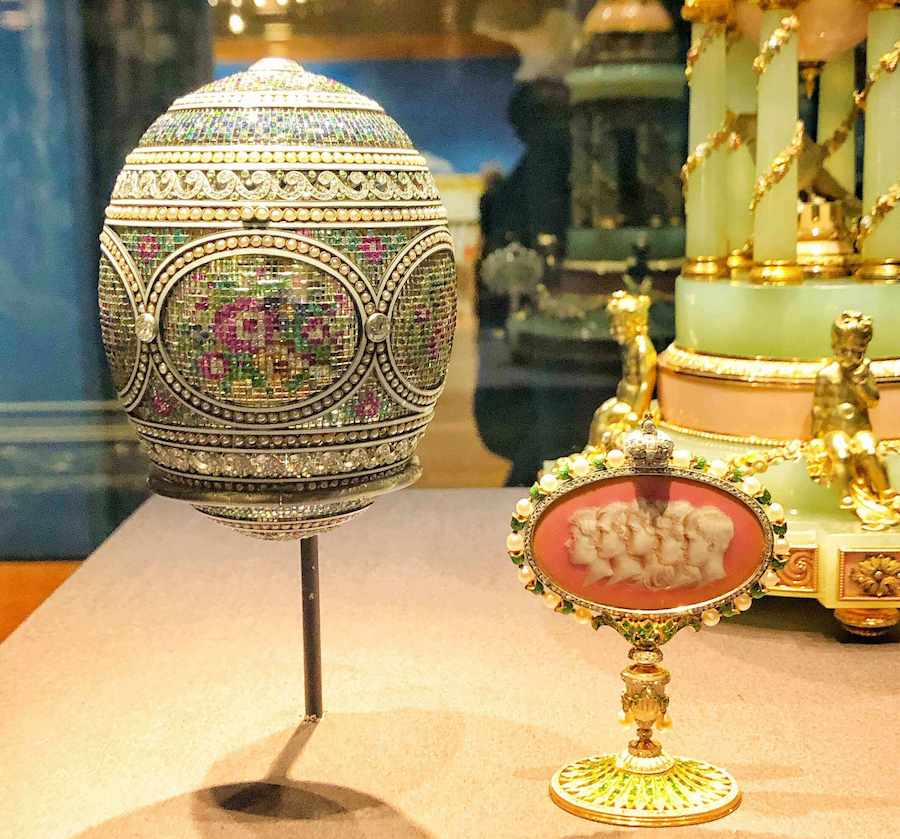 On International Women’s Day, it seems apt to celebrate a woman responsible for some of the most iconic jewels and objet d’art known to us. Alma Pihl, perhaps not a household name, was born in 1888 into a family of jewellers and goldsmiths. She entered the house of Fabergé in 1909 and was tasked with documenting the pieces created in the workshops for the firm’s archive. Her exquisite life size renditions of the jewels noted the gemstones used as well as the price. Naturally skilled, she started to design pieces in her own time which caught the eye of the head workmaster and accordingly Fabergé himself. She was promoted and became the first woman designer for the firm of Fabergé.

Dr Emmanuel Nobel, the oil magnate, commissioned Fabergé to create 40 small jewels which were to be hidden in the folds of napkins that would be used by his dinner guests and were intended to surprise and delight them but not be such extravagant gifts as to be seen as bribes. Alma Pihl rose to the occasion, using the frost on the window of the design room as inspiration and designed a series of ‘snowflake jewels’. Nobel was thrilled and commissioned many more pieces in this vein, including an Easter Egg, all of which were groundwork for one of the most spectacular Imperial pieces ever produced by the house of Fabergé – The Winter Egg. Gifted by Nicholas II to his mother, the dowager Empress Maria Feodorovna in 1913, Alma Pihl’s design was a triumph, allowing the craftspeople to demonstrate their virtuosity in stone carving, stone setting and surely transported anyone who saw it into the depths of a Russian winter.

Such was the reception to the 1913 Imperial Egg, Pihl was tasked the following year with creating the Egg which would be presented by the Tsar to the Tsarina, Alexandra. Now in the Royal collection, The Mosaic Egg is one of my personal favourites. Technically brilliant, unbelievably difficult to have achieved (even by the most skilled artisans) and aesthetically stunning, it is a tour de force of design and creativity.

I think the most striking point of all is to remember the time in which this took place. The early 20th century was a time when many women were excluded from the workplace, and if they were in a working environment their skills ignored and a career progression impossible. A woman bucking that trend can only be inspirational.

Jewellery | News
Back to blog

"I wanted a special pearl necklace for my wife to celebrate our 30th wedding anniversary but knew very little about pearls. I was given Clare’s name as an expert and duly contacted her. Not only is she hugely knowledgeable but gave extremely good advice and grasped instantly what I and my wife wanted. She found exactly the right piece (a natural pearl necklace) and then ensured it was a correct fit. She had the knowledge and contacts to have it superbly restrung. In addition Clare is an extremely nice person who goes to great trouble and it is a pleasure to deal with her."

"Clare Blatherwick was an absolute pleasure to deal with, she made me feel at ease immediately.  Clare is very professional and really goes the extra mile.  It was a tricky design brief as there were diamonds from different pieces of jewellery, which were very precious to me, that I was looking to have made into a new ring and necklace.  Clare has an incredible knowledge and passion for jewellery and I enjoyed working with her to come up with the perfect designs. I am absolutely delighted with my new ring and necklace, they are exactly what I asked for and I wouldn’t hesitate to recommend her."